Earth, water, fire and some magic

From the rough red clay to the smooth, silky, sparkling faience, there are only a few basic ingredients: water, earth and fire. But for the delicate alchemy to succeed, for the magic to work, a complete mastery of a centuries-old craft is required: molding, throwing, casting, glazing, festooning, decorating, cooking.

Custodian of traditional techniques and handicrafts, the Atelier Soleil faience maker knows that each and every piece that comes out of his kiln is unique and bears his invisible fingerprints.

Discover the making of faience (in French):

All hands on clay

Carefully selected by the Atelier Soleil for its lightness and purity, the natural clay is worked by hand only, according to three traditional methods.

Embossing. Flat pieces are shaped by embossing: a thin layer of clay is applied on a potter’s wheel and molded by hand, after which some festoons can be added.

Throwing. This technique is required for vases and pitchers. Placed squarely on a wheel, a lump of clay is quickly transformed by the potter’s hands. Handles or other festoons are later added, using liquid clay called “barbotine” as glue.

Molding. Some shapes are much too intricate to be embossed or thrown, so the faience maker has to mold them (Atelier Soleil creates its own original molds). Made of plaster, molds are filled with liquid clay (“barbotine”) and then left to dry.

Faience is fired twice: once to cook the dried clay, or “biscuit”; then, when it has been glazed and painted, to vitrify it through heat fusion for a smooth, glasslike finish.

Firing of the biscuit. Once shaped and dried, clay pieces are fired in the kiln at 1,020 degrees Celsius. The clay hardens into a “biscuit”, which is later dipped by hand into a glaze bath using special pincers.

Firing of the glaze. The decorated (or plain white glazed) biscuit is ready for a second firing at 960 degrees Celsius, fusion temperature of the glaze. So as not to fuse with each other, pieces stand apart, with plates balanced on three small wedges that leave distinctive marks underneath. 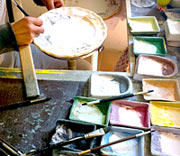 The decorator always draws freehand, on “raw” glaze, according to models created by the Atelier Soleil, and sometimes on customer request. The “paint” consists of different metallic oxides mixed in with water. They determine the final colors: copper for green, iron for yellow, manganese for brown and black, cobalt for blue, etc.

But it is a delicate alchemy: oxides are applied with thin brushes and the powdery glaze absorbs them instantly. The decorator’s hand must always be steady for the slightest mistake would translate into a blotch and ruin the piece!

The story of a real passion

In 1979, Tonia Peyrot, a renowned interior decorator, created the faience workshop Atelier de Ségriès. When she sold it in 1992, her son Franck Scherer, passionate about faience and having mastered the craft, decided to launch his own atelier.

At Ségriès, he met Géraldine Dorche. In January 1995, they opened the Atelier Soleil. And in 2006, going back to their roots, they acquired the original molds of the Atelier de Ségriès collections, which they helped create.

Franck is the master craftsman, Géraldine manages the business, and highly-trained decorators paint the faience by hand. Whether Franck works on traditional pieces, creates new designs and forms, or completes a client’s special order, he always uses centuries-old techniques, with absolute respect for his art.